Learn how to help orphans

Hello, my name is Ilya, I was born in 2003 in the city of Alchevsk (Luhansk region. When I was a child I was dropped in the maternity ward by the nursing staff, resulting in an injury that affected my brain development. Later, I was officially diagnosed with cerebral palsy (right-sided hemiparesis.

Soon, I started taking vocal lessons and improved. Along with speech help, I also underwent several operations for my legs. At the age of 7, I was seen by doctors who wrapped my legs in a plaster cast, leaving me bedridden for another six months.

Once I was able to, I studied and walked in the plaster casts. While in school I attended dance lessons and language courses after school. I even tried my hand at theater art and computer courses, creating animations, and much more.

In 2013 my parents divorced, leaving me to support my mother. In 2014, the war began in Donbas. I saw tanks and explosions but thankfully was uninjured. My mother and I took refuge in Sergeevka in southern Ukraine. I had to change school and make new friends. I had to give up my hobbies because there was not enough money for life.

In 2020 I began university, focusing on International Relations. While I was studying, my mother was hospitalized due to Covid. I had to live alone in self-isolation. My friends helped me; bringing food, taking out the trash, going to the university to deliver important forms. After 3 weeks, my mom was discharged from the hospital.

I am grateful to you for the opportunity to tell you about my life, about achievements, and plans for the future. Ilya 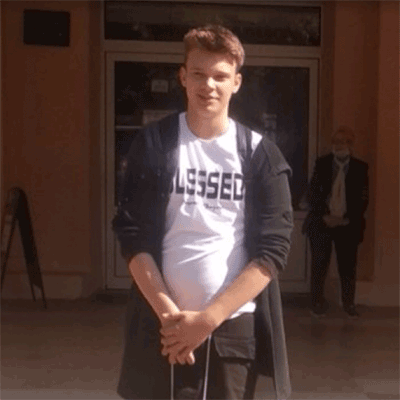 Help orphans in Ukraine in this way: